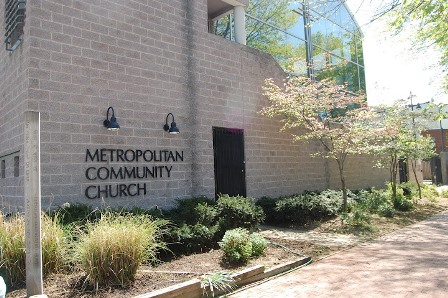 The Metropolitan Community Church of Washington (MCC Washington or MCC DC) was founded in 1970 by Rev. J. E. Paul Breton as the Community Church of Washington, D.C. It was chartered on May 11, 1971 by the Universal Fellowship of Metropolitan Community Churches (UFMCC). The church originally met in Rev. Paul Breton’s home on Capitol Hill. The early years of the congregation saw big changes in leadership. Rev. Breton resigned in January 1973 and Rev. John Barbone was installed as Interim Pastor a month later and by March was elected as Senior Pastor, serving until May 1975. During this time MCC moved to the chapel of the First Congregational Church at 10th and G Streets, N.W. These years saw a great growth in the church and the first real community visibility both socially and politically. Growth was as constant as leadership changes. 1975 in particular was a year of many transitions. Robert Moore, a lay leader, served as worship coordinator shortly after Rev. Barbone’s resignation. In the fall of 1975, the congregation moved from the small chapel to the main sanctuary of First Congregational (where we remained until 1984). The years at First Church saw a growth in many activities and many joint ministry efforts by MCC and our host church. The relationship between the two churches became a model for other congregations in relating to MCC congregations around the U.S.A. We shall forever be indebted to First Church for their bold commitment to our ministry and their prophetic leadership to the church at large.

By September 1975, Rev. Jack Isbell was appointed Senior Pastor, serving until December 1976. In January 1977, Rev. Roy Birchard was elected interim Pastor while the Pulpit Committee searched for a new Pastor. In June of 1977 the Rev. Larry J. Uhrig was elected Pastor and continued to serve in this position until the time of his death in 1993.
During those years the church grew in its community visibility and showed budding signs of diversity. By 1978, the congregation was able to afford a full time organist and music minister (Carl Barnwell, II). Greater exposure attracted diversity. Though often difficult, the church’s number of African-Americans expanded over time. Bob Lewis remains our last living charter member. Esther Smith is another early pioneer, who started attending sometime between 1973 and 1974. While they admit that their efforts often fell short of their goals, they were committed to the congregation, its purpose and its service.

The defining characteristic of the church in the 1980s was clearly the response to the AIDS epidemic. The congregation was a vanguard in partnership and innovation. In October 1982, the church partnered with the Whitman-Walker Clinic, the NIH, MCC Baltimore, and Georgetown University Hospital to host one of the first AIDS forums in the nation (the event was held at the church). The congregation already had a long partnership with the Whitman-Walker clinic. Outreach in caring for the community was also a source of growth and the congregation literally began to outgrow the needs associated with First Congregational. In 1984 the church purchased our first ministry center at 415 M Street, NW (for $160,000). But we quickly outgrew that space, leading us to provide two morning worship services at 9 a.m. and 11 a.m., in addition to an evening service at 7 p.m. The Board of Directors also established Trustees for the Buchanan Memorial Building Fund. The Buchanan Trustees began looking at the possibility of acquiring land in the neighborhood to build a new ministry center. During the years of 1987-89 we assembled the six lots at the corner of 5th and Ridge Streets, N.W. upon which stands our current ministry facility. Construction began on December 23, 1991. On December 17, 1992 the congregation moved into our current home. The first event (a Christmas Concert the night of December 18, 1993) began the excitement of a new ministry center and a growing congregation of some five hundred people including official members and regular attendees. Worship at this time typically included between 300 and 400 people. On March 27, 1993 our Ministry Center was dedicated to the Glory of God. Sadly, the Rev. Larry J. Uhrig died December 28, 1993.

In March of 1994 the Rev. R. Steven Taylor was named Interim Pastor. Later in 1995, the congregation elected then-Associate Pastor Rev. Candace Shultis as Senior Pastor. Despite the actual loss of life, church membership grew, even soaring. The 1990s saw the congregation grow to over 400 members, several paid clergy staff, vibrant lay leadership, and extensive ministry program. Rev. Shultis would then go on to resign in December 2007, leaving to become Senior Pastor of King of Peace MCC in St. Petersburg, FL. The congregation called Rev. Elder Charlie Arehart to be our Interim Pastor in June 2008 and he served through the end of 2010. Charlie agreed to come out of retirement and lead our discernment and transition from two very long and defining pastorates. We are forever grateful to him and his partner, David, for the love, care, and leadership they provided
In November 2009, the congregation elected with a near unanimous vote Rev. J. Dwayne Johnson to be the new Senior Pastor. Pastor Dwayne previously served as Senior Pastor of Resurrection MCC in Houston, TX, leading one of the denomination’s largest congregations into a period growth in members and numbers. He had a long history with MCCDC in the 1990s, when he transitioned into MCC from the Church of the Nazarene. As he helped to preside over our 40th anniversary in 2011, we look forward to leadership that will take us into our next 40 years.

For Email Marketing you can trust